If you are new to the game of poker, the poker play order might be confusing at times. This is true even if you play just one variation of the game, and especially if you play games other than Texas Hold’em as well.

The betting order in all forms of poker is fixed and never really changes. But you will need to understand how it works to always know whose turn it is to play.

If you are not sure who bets first in poker, you are in the right place. I am going to explain all the possible situations and the Texas Hold’em betting order before the flop and on every street after the flop is dealt out.

Make sure to read carefully and don’t miss anything, as there are some situations in which you will need to know the exact rules so as not to play out of order.

Who Bets First in Poker Before the Flop?

If you have never played a hand of poker before in your life, you will surely not be aware of the poker play order in which you are supposed to act.

If you are playing Texas Hold’em, the most popular variation of the game, a hand will start with everyone getting dealt two cards and two players being asked to place “the blinds.”

The blinds are involuntary bets placed by the two players sitting to the left of the dealer.

These bets are mandatory, and they are what drives the action for the rest of the hand.

The Texas Hold’em betting order is dependent on the blinds, as the player sitting directly to the left of the big blind is always first to act before the flop. 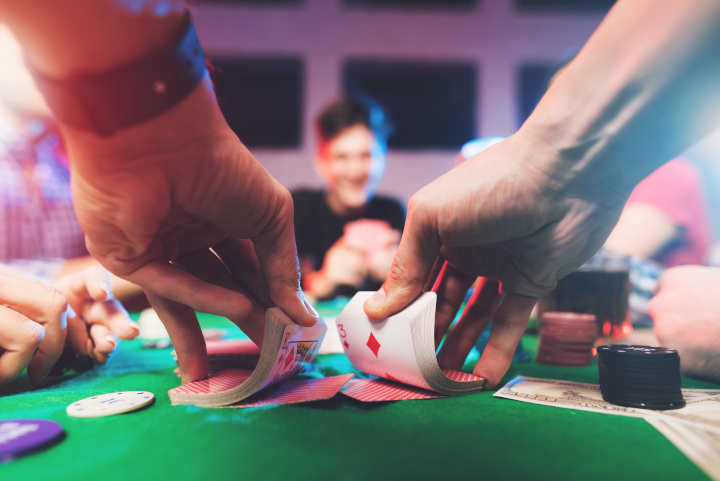 This player will have the option of folding their cards if they does not like them, calling the value of the big blind, or making a raise to any amount (up to the number of chips they have on the table).

This poker play order continues all the way around the table until the action comes to the players who posted the small blind and the big blind in the first place.

If no player has made a raise, the player in the big blind will have the option to check. This simply means that they’re happy with seeing the flop without making a raise since they’ve already paid the big blind.

If one player makes a raise and another player decides to make a re-raise, the initial raiser will get their option once the action goes around the table. They will once again have the option to fold, call or make further raises.

The pre-flop action always goes in the same way, with players taking their turns at playing in a clockwise poker play order.

Who Bets First in Poker After the Flop?

You now know who bets first in poker before the flop, but this is not where the hand ends. There are three more streets of betting left, and players will have to take their turns on these as well.

The next betting round is the flop, and the Texas Hold’em order of play is slightly different on this one. Unlike pre-flop, the player in the small blind will now have the first option.

If the player who posted the small blind initially is still active on the flop, they will be the first to play. They will have the option to check, allowing other players to make bets or make a bet themselves. 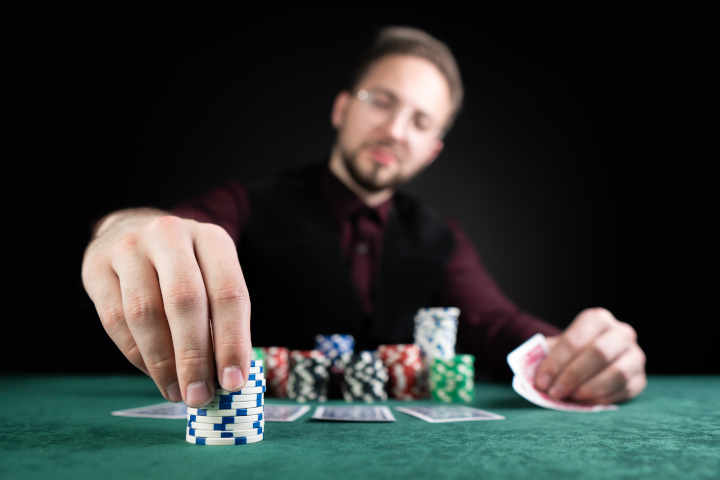 If the player in the small blind has folded before the flop, the next active player to the left will be the first to act. In every case, the player sitting at the table with the dealer button will be the last to act on the flop, turn, and river.

This is exactly what makes the dealer button such a favorable poker position to be in. You will always have the option to play last and see what your opponents are doing on each of the betting streets.

The poker play order does not only include the various betting actions but also showing your cards once all play is done, at showdown.

If more than one player is still active in the hand after the river betting round, the dealer will announce a showdown, prompting the remaining players to show their cards.

At this point, there is often confusion about who should show his cards first, and this is confusion that comes out of not knowing the rules.

In the Texas Hold’em order of play, players will show their cards in order from the small blind to the left if there was no aggressive action on the river.

If one of the players made a bet and other players called, the aggressive player should show their cards first, followed by other players to his left.

Of course, a player who has a strong hand that is likely the winner should show their cards quickly as a matter of poker etiquette, but they’re not obligated to do so under the rules of the game.

If you want to see your opponents’ cards, you are allowed to ask for them to show them or send them into the muck if it is their turn to show according to the rules of the game.

Who Bets First in Other Forms of Poker?

Texas Hold’em is not the only variation of the game of poker. Mixed game players have to learn the order of play for each of the games they play, which is one of the things that make mixed games so tricky to play.

Popular poker games with blinds, such as Pot Limit Omaha and Deuce to Seven Single and Triple Draw, all use the same poker play order as Texas Hold’em.

However, some other games, such as Seven Card Stud and Razz, are quite a bit different in the way action is organized since there are no blinds in play. 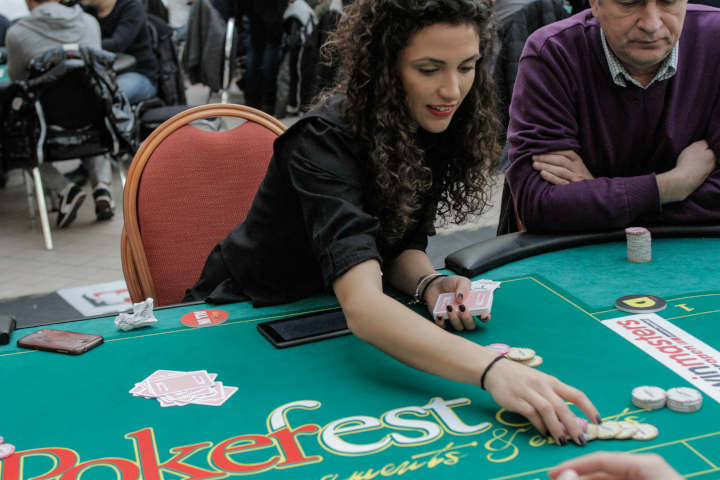 After the fourth street, the player with the highest exposed hand will play first, and the action will continue clockwise around the table.

In Seven Card Stud, the showdown also starts with the player who has the strongest exposed hand showing their cards first.

In Razz, which is a variation of Seven Card Stud, the same rules apply, except the first player to act will be the one with the highest-ranked card. The player with the lowest-ranked poker hand will be the first after the fourth street.

In some other variations of the game, the poker play order may be different. It is worth finding out who bets first in the poker game you are playing before you put your chips in play.

In games like Texas Hold’em and Pot-Limit Omaha, players are only obligated to pay the small blind and the big blind when it is their turn. This is the only money that goes into the pot before the cards are dealt.

However, in some cash games, players can agree to allow for a “straddle” or a “Mississippi straddle,” both of which are types of blind bets made before seeing your cards.

The poker straddle is made by the player sitting to the left of the dealer, and it will typically be worth 2x the value of the big blind. 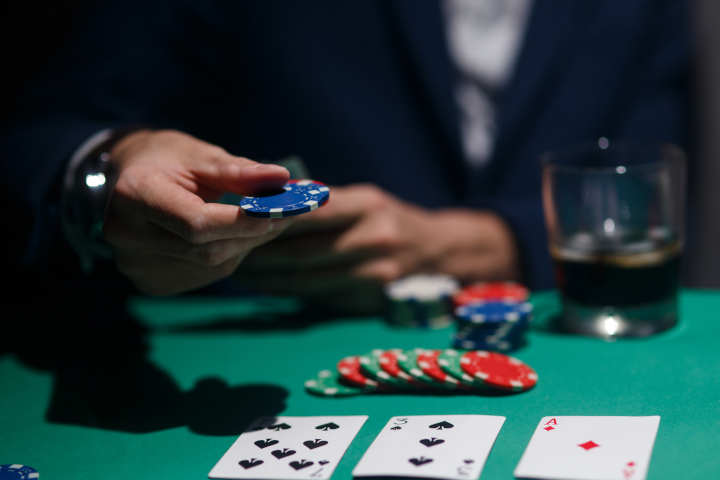 In either case, the presence of straddle bets changes the poker play order a bit. The classic straddle acts as the third blind, with the player sitting to the left of the straddle playing first and the straddle going last.

It is important to note that the presence of straddles only changes the pre-flop betting order. The action on the flop will continue in the same way it would in an unstraddled hand.

You should now know who bets first in poker, but this still leaves the question of what it actually means to act on your hand.

Any time the action is on you in the poker play order, you will be able to select between a number of options, as follows:

You now know the exact betting order for your next poker game, as well as all the actions you can possibly take. When to take each of these actions is a question you will have to find an answer to in our other guides.

For the time being, I recommend firing up some low-stakes online poker action and practicing the poker play order before you join a live poker game. This way, you can be sure that you are doing things in the right order when you do sit at that big table.

Who bets first in poker before the flop?

Before the flop is dealt out, all players take turns acting on their hands. The player to the left of the big blind will be the first to act pre-flop in a typical hand of Texas Hold’em.

Who bets first in poker after the flop?

On the flop, turn, and river, the player who posted the small blind, will act first. If this player is no longer active, the nearest active player to their left will act first.

Who goes last in a hand of poker?

In Texas Hold’em, the dealer goes last on every street after the flop, making this the most favorable position. Pre-flop, the player in the big blind goes last.

When should I show my cards in poker?

When a poker hand goes to showdown, you should always show your cards first if you were the last player to make an aggressive action (bet or raise). If there was no aggression on the river, the nearest player to the left of the dealer should show his cards first.

How does a straddle change the poker play order?

Anytime a straddle is posted in a poker hand, the poker play order will change. If the UTG player posted a straddle, the UTG+1 player would play first. If a Mississippi straddle is active on the button, the player in the small blind will play first.

Poker Basics
How to Take Your Online Poker Game to the Next Level
May 5, 2022
0 12
Categories
Recent Articles