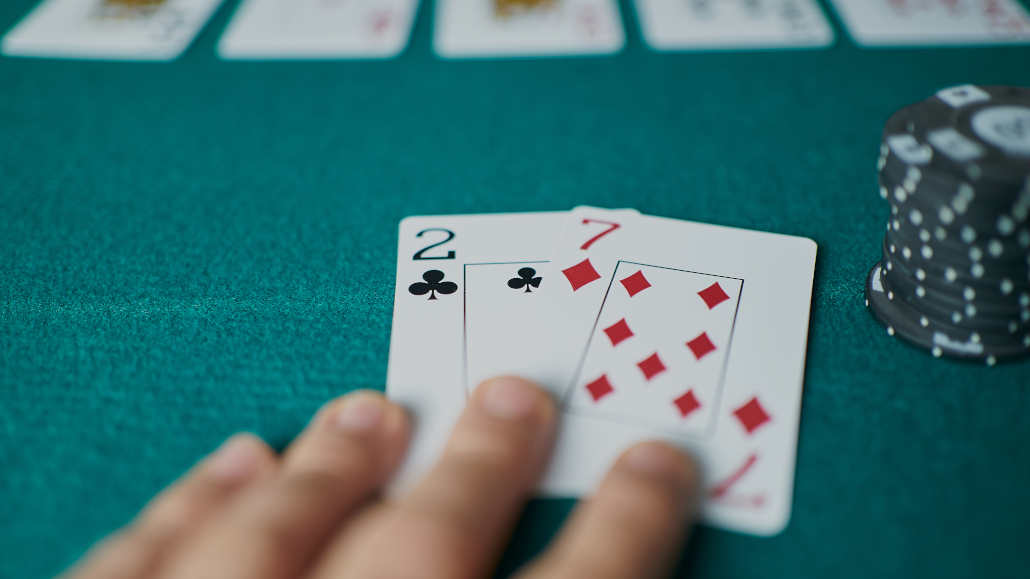 One of the first things most of us learned in poker was that pocket aces are the best starting hand, while the dreaded 27 offsuit is the worst hand we can be dealt before the flop.

Indeed, 27 offsuit is a trash hand that rarely has any value, but is it actually the worst hand in poker?

To answer that question, we have to look at poker from many perspectives and think about many different scenarios and game formats.

In addition to that, it is important to understand what makes 27 offsuit one of the worst poker hands and why many other hands fall in a very similar category.

Poker novices don’t know how to think about poker in terms of equities, so I am going to start out by explaining exactly what it is that makes 27 offsuit such a bad poker hand and why you should avoid playing it.

Why is 27 Offsuit Such a Bad Starting Hand?

When thinking about the quality of a starting hand, there are two things you can consider. The first is its sheer equity against other hands, and the other is its “playability.”

Equity represents the pure mathematical value of the hand. If all five community cards were dealt out, how often would my hand be the winner?

The “playability” factor is a bit different and less quantifiable.

It refers to a poker hand’s ability to get to showdowns on many different boards and make big poker hands like straights and flushes.

While it is sheer equity that makes hands like AK offsuit very strong, other hands like 98 suited are good starting candidates because of their playability.

Looking from either of these two perspectives, 27 offsuit is one of the worst poker hands, and there are very few worse candidates you can imagine starting a hand with. 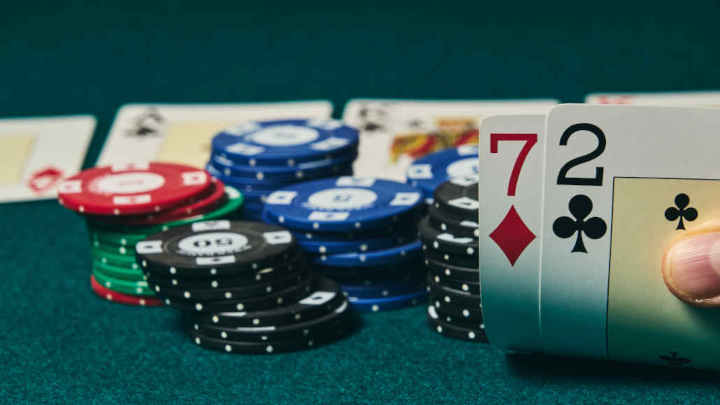 Confronted with pocket aces, 27 offsuit has just a 12.4% chance to win the hand. Against AK offsuit (in different suits), the hand has 32.78% equity, which does not seem like too bad.

However, when you factor in the “playability,” things get a lot trickier. 2

7 offsuit only has the 32.78% equity if it gets all the way to the river,  but there are very few flops on which you can actually keep playing it.

In fact, even when you do hit a pair with 27 offsuit, it can be extremely hard to get to the turn and the river because your opponent will fire bets, and you will never have even a top pair type of hand.

Instead, you will be left holding the bottom or middle pair on many boards, which will only get worse and worse with every new community card.

Because of the mix of these two factors, 27 offsuit being called the worst hand in poker is definitely not outrageous, although technically, there are situations when it is not the actual worst hand.

Can 27 Offsuit Ever Be the Best Hand?

Of course, looking at the poker hands rankings chart, you will quickly notice that 27 offsuit is not the lowest-ranked hand on it and that there are hands against which it is a favorite.

In the simplest of terms, 27 offsuit is still a 7-high hand, which means that all 6-high, 5-high, and 4-high hands are weaker than it.

Finally, 23 is another hand weaker than 27 and one that it dominates.

You can see that even against hands that it’s better than, 27 offsuit does not perform exceptionally well. On many boards, three or more overcards will hit, resulting in a split-pot.

Yet, 27 offsuit is a favorite against these hands, and there can be situations in tournament poker where you will end up being all-in with 27 offsuit and being a favorite.

These situations are very rare and will always happen at very shallow stacks, but they do indicate that 27 offsuit might just not be the worst hand in poker after all.

When Can I Play 27 Offsuit?

Before I get into some situations when playing 27 offsuit can be a reasonable thing to do, let me just say that these are quite rare, and the hand should be routinely discarded almost always.

If you are playing in a cash game, you should fold your 27 offsuit literally every time.

If you are in the small blind and everyone folds to you, you should fold as well. In the big blind, you can check it and see the free flop, proceeding to fold on almost all boards.

In tournament poker, there are situations when it is technically profitable to go all-in with any two cards. In these scenarios, 27 offsuit will also qualify.

These are usually spots in the small blind or on the button at reasonably short stacks. 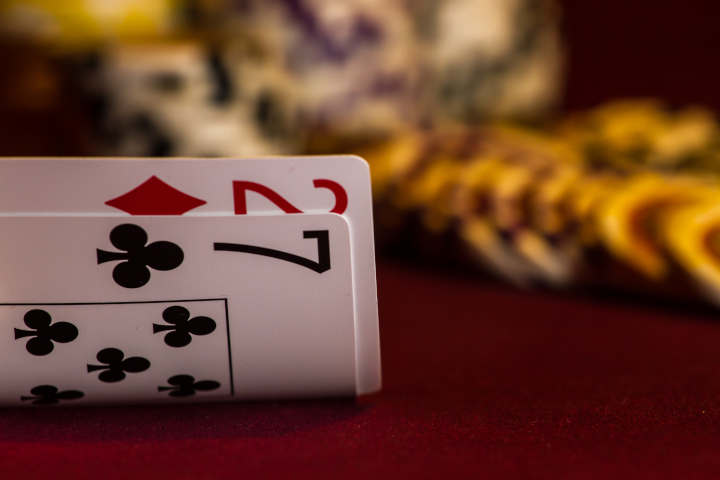 In some tournament situations, when the ICM pressure is very high, and you have the big stack, applying maximum pressure with your 27 offsuit can make sense as well, simply because your cards don’t really matter.

Finally, 27 offsuit can be opened in heads-up games against players who fold too many big blinds and play exceptionally passive post-flop.

In most cases, 27 offsuit is still a fold on the button in a heads-up game, simply because you are dealt a better hand almost every other time, and this is your best chance to fold some hands.

Is 27 Suited Any Better?

When we talk about the worst poker hands, the focus is always on offsuit hands, and for a very good reason. After all, these hands don’t even have the one added benefit of being able to make a flush.

Unlike 27 offsuit, its suited counterpart can make a flush with just three community cards, which gives it an extra bit of playability and a bit of extra equity as well.

In terms of sheer equity, 27 suited has a few extra percentage points against other hands, barring those that are suited in the same suit. In this case, there are reverse odds implications to worry about.

Yet, even if suited, 27 is not a poker hand you will want to put too much confidence in, and I recommend always looking for good reasons to fold it instead of good reasons to play it.

If you are a fan of TV poker shows such as High Stakes Poker or Poker After Dark, you have no doubt seen players play the fabled 27 game on occasion.

With 27 being widely recognized as the worst hand in poker, players sometimes like to mix it up by letting anyone who wins a pot with it earn an extra bounty.

This incentivizes players to play the one hand that they would normally not dream of playing but also gives everyone else a chance to win a big pot when someone is bluffing with it.

The 27 game adds a whole new level to the regular poker game, especially when the bounty for winning the pot with this hand is valuable.

The more money you put into the 27 game, the more players will try to win pots with it. This can result in some crazy situations and unlikely scenarios that you would not normally see at the poker table.

The 27 game is a very simple thing you can even add to your home game and spice things up, not that most home games need players playing more hands than they already are.

As I already mentioned, 27 offsuit is only the worst hand in poker by popular choice, and there are, in fact, quite a few hands that we can put in the same category with it. 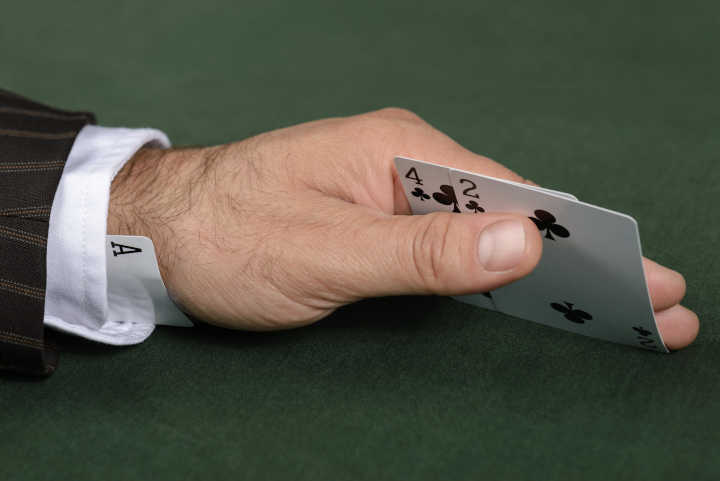 Some of these may have a bit higher equity against a random range of hands, but they all perform extremely poorly even against the widest ranges.

In fact, you should make very little difference between 27 offsuit and the other hands that I have listed as my candidates for the absolute worst hand in poker.

For some reason, I have actually seen people play a hand like 49 offsuit, and especially 49 suited, in live poker games.

While it may be a better hand than 27 in theory, 49 is an absolute trash hand that cannot make a straight or a flush and will only flop bad pairs that will cost you more money.

The scenarios in which playing 49 offsuit makes sense are equally as infrequent as those in which you should play 27 offsuit. I highly recommend discarding this hand as fast as you are dealt it.

Being dealt a five and a ten can seem attractive to novice poker players who don’t quite understand poker, but the truth is this is yet another trash hand that you should never play.

You are only holding T-high before the flop and are unlikely to have anything stronger than one mediocre pair on the flop.

Hitting a ten will cost you money more often than it will win you anything while hitting a five will be almost useless in most hands, as you will not be able to sustain much pressure with it.

Since there are no options to make a straight or a flush with the hand, you will be waiting to make two pair or better, and this is extremely hard to do.

If you are dealt 5T offsuit the next time you play poker, throw your cards away and wait for a better situation to get involved. It’s almost guaranteed to come the very next hand!

T2 Offsuit – Despite the Nickname

While the T2 offsuit hand has carved its name in the poker anthology as “the Doyle Brunson hand,” it is actually a complete trash hand that the Big Papa himself very rarely plays.

In fact, Brunson plays a relatively snug style of poker and dreads offsuit hands, so you are more likely to see him play any other hand than T2. 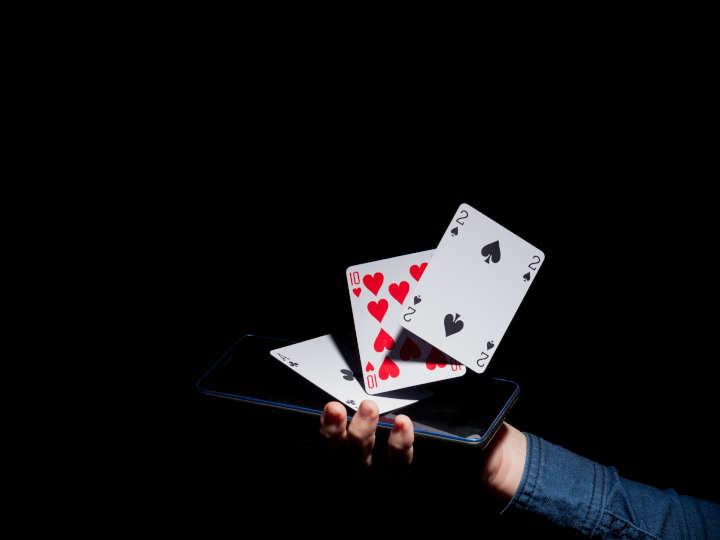 The poker legend did win a couple of WSOP bracelets holding this hand, but you need to understand that tournament poker can be different than cash games, and the stacks in WSOP events can get extremely shallow at times.

While it may be cool to say, “you did it to honor Dolly,” I urge you to listen to the inner voice that’s telling you to get rid of the trash and make your big statements when you get dealt “American Airlines” or “Big Slick.”

27 Offsuit and Other Trash Hands in Poker

Poker is certainly a game you can play to have some fun and one that doesn’t always have to be taken too seriously.

Yet, whether you are serious about poker or playing it for fun, there are some hands you should never play, even if only to save yourself from being called out.

27 offsuit ranks as one of the worst poker hands by all terms and is widely recognized as the actual worst hand in poker, so the easiest way to play it is to always let it go.

I will let you decide for yourselves if 27 offsuit is the actual worst poker hand or not for you, but I can guarantee you that playing it often will not bring anything good your way.