Poker Dice Game – How to Play Some Poker without Cards 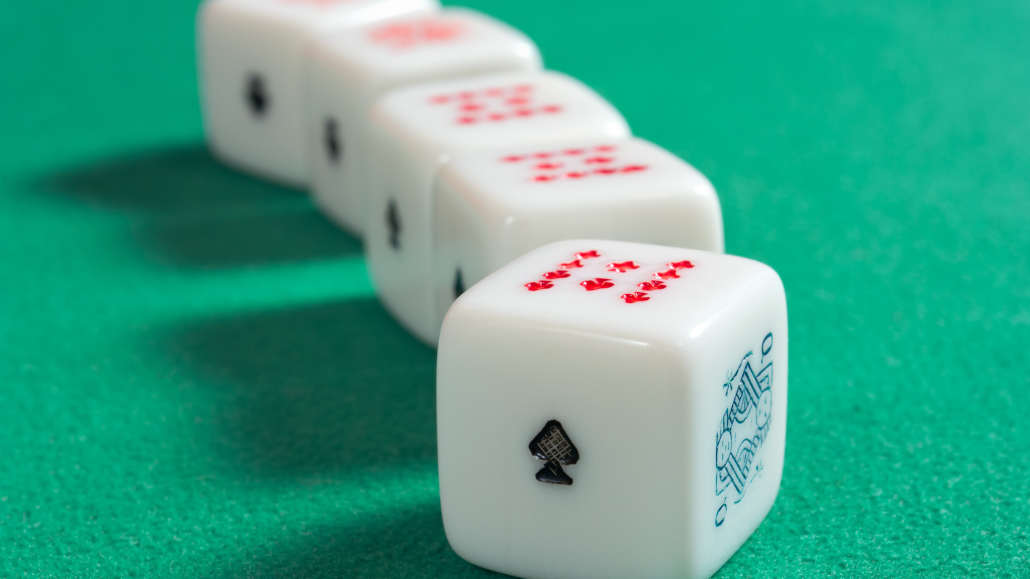 Traditionally speaking, poker is a card game, but there are many ways to play variations of poker, even if you don’t have a deck of cards on hand.

Video poker is one popular variation of poker that’s played using only a machine but today I am going to teach you how to play poker using just dice.

Poker dice is a popular game played across America, with both regular dice and specialized sets of dice made for this relatively popular game.

If you are a poker player, you may not be thrilled with all the poker dice rules, as this is a game that comes down to luck more than anything else.

Yet, if you are just looking for some quick action with your friends and don’t mind luck determining the winner, for the most part, poker dice is going to be a great game for you.

If you have never played poker dice games before, you should start out by learning the poker dice rules and basic gameplay and work your way to playing the game from here.

If you have specialized poker dice, these will have aces, kings, queens, jacks, tens, and nines on their six sides, but you can also play with regular dice.

To get started, you and your buddies should come up with the stakes, deciding what the winner of each poker dice hand is going to win.

Next up, I recommend having five separate dice for each player so as to make sure everyone’s hand is still visible at the end of the rolling process. 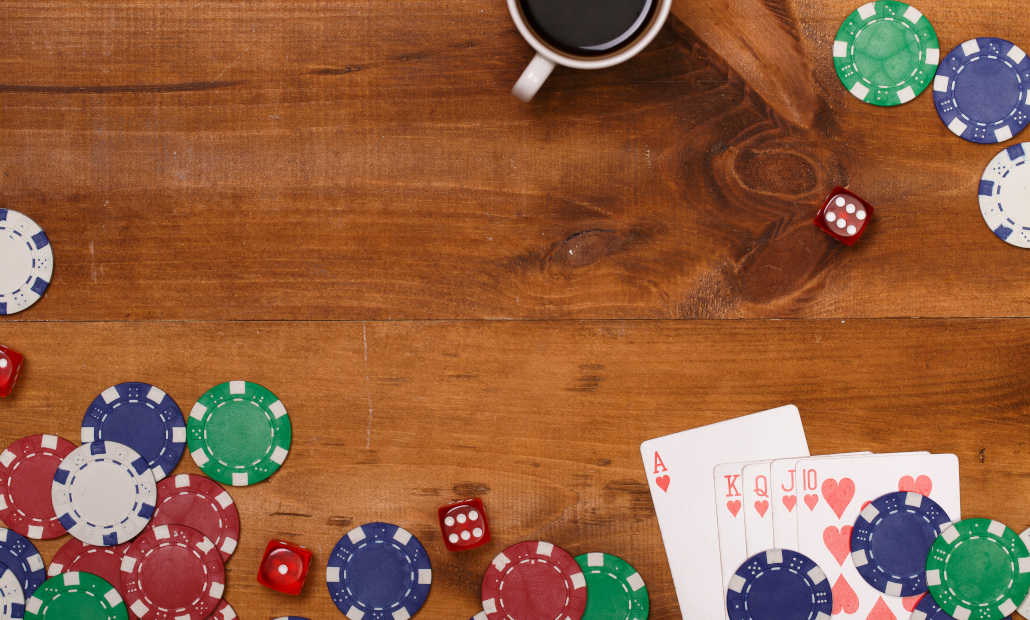 Once the stakes are set, and everyone has their dice, you can start playing. The traditional way of playing is for every hand to count separately, with a determined stake per hand.

Each player gets to roll his dice up to three times. A player can roll any number of dice he wants on each of the three rolls while leaving the other dice in place.

For instance, you might roll a five-of-a-kind and not want to roll anymore. On the other hand, you might roll one pair and want to improve on that, so rolling the remaining three dice will be an option.

Once each player has rolled his dice up to three times, the winner of the hand is decided based on a preset table of poker hands.

As you can see, the hand ranking in poker dice are very simple to memorize, and there isn’t much to be said for them.

The one exception to that are straights, which count in some poker dice games and don’t count in others.

Whether you are going to count straights or not is up to you and your friends to decide. However, it is worth noting that it is actually easier to make a full house than a straight in poker dice, although most games still count a full house as more valuable.

By making straights equal to no hand, you increase the chance of a player having no hand and thus make the game a bit more interesting from the perspective of players busting out.

Again, the rules of poker dice are not set in stone, and you can agree on anything you want, as long as everyone in the game is aware of all the rules.

I have already mentioned that poker dice is usually played with specialized dice that have royalty faces on them and are made specifically for this type of game.

However, you can play with regular dice as well if you don’t have appropriate dice, and there will be no big difference.

Traditionally, when poker dice is played with regular dice, the number one side of the dice is counted as an ace and the most valuable one. 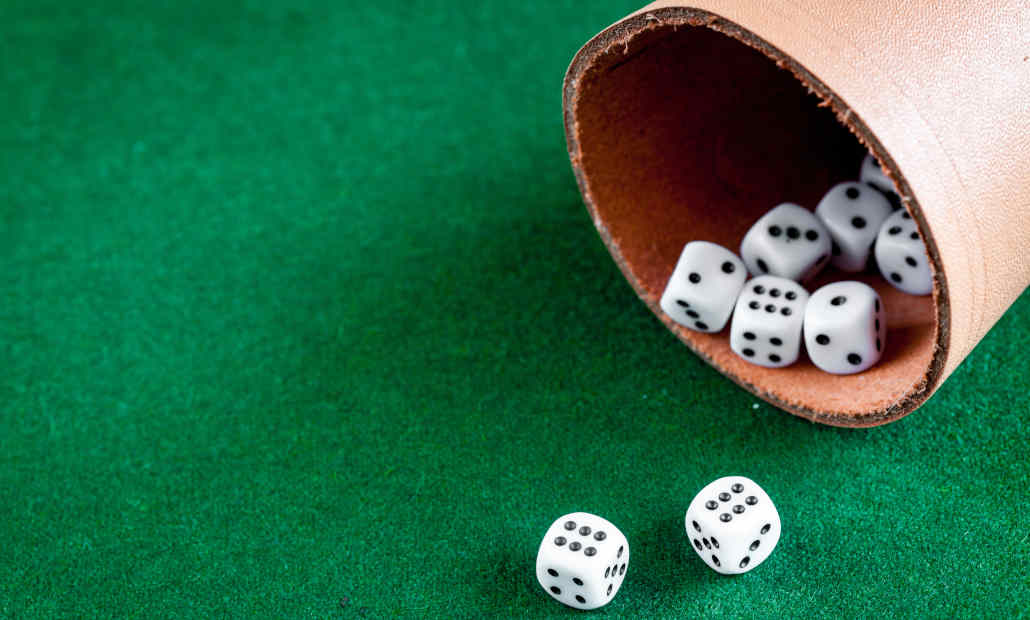 All the other sides are counted at face value, with the two being the least valuable and the six being the most valuable.

If you so choose, you can make the six the most valuable and the one the least valuable, although this is not the most common way the game is played with regular dice.

Apart from this, there should be no problems with playing poker dice with regular playing dice, as there are no flushes to account for or any other obstacles.

Setting up a Game of Poker Dice

One of the best things about poker dice is the fact this game can be played just about anywhere and with minimal effort in terms of setting it up.

While you need a poker table, card, chips, and a dealer to play regular poker, all you really need for poker dice is some dice, with even just five dice being enough.

If you want to make your poker dice games memorable, you could set up a separate rolling area for each player to make sure everyone’s dice are safe and not touched by other players’ dice or tempered in other ways.

However, even if you have just five dice, you can still play poker dice without much trouble.

Once a player is done rolling, make sure everyone sees his dice and verbally agrees on their hand before the next player rolls.

In either case, you should make sure that everyone is watching the rolls so as to avoid potential cheating or prevent players from accusing others of cheating when they didn’t.

To further prevent cheating, you should make sure that players have to hit a wall or an obstacle on the table with their dice and have them bounce off this obstacle. This ensures no one is rigging their rolls. 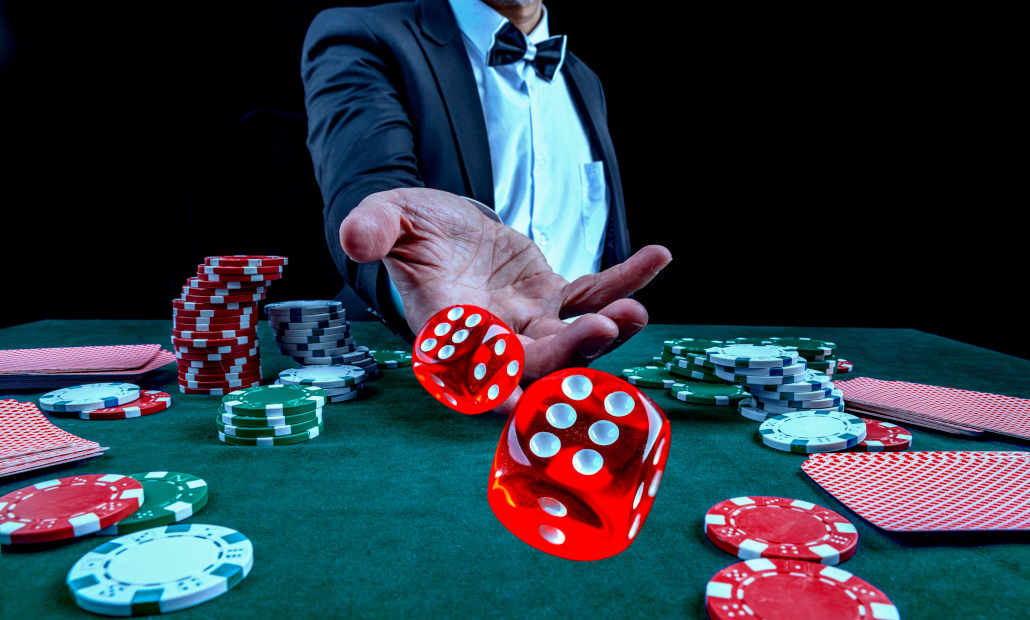 You can also use a dice cup if you have one, and make sure that every player shakes the cup well before rolling the dice out of it.

I highly recommend playing poker dice only with players you trust and aren’t worried about cheating you. The game is much easier to cheat and shoot angles at than any form of poker played with cards.

How Many Players Can Play Poker Dice?

There isn’t really a limit to the number of players who can play poker dice, unlike most other poker games, which are limited by several factors.

Each player will be rolling his own set of dice, which avoids any restrictions that exist in poker thanks to the possible lack of cards in the deck.

Players will take turns rolling, and the best poker hand will win in the end. For that reason, any number of players can play poker dice games.

I recommend anywhere between four and six players for poker dice, as too many players make the game too slow and chaotic, while too few can make it dull.

If you can get a few of your friends over to your house to play or get them to play while waiting for an actual poker game to start at the local card club, the game is an ideal pastime and a fun way to gamble without anyone having the edge.

Poker dice is a gambler’s game, and it doesn’t include too much strategy. Yet, there are some things to take into consideration when it comes to the way you play.

If you are going first in a particular hand of poker dice, you will want to roll a decent hand, but the actual strength of the hand you need to win will depend on the number of players involved in the game.

The more players are playing, the stronger hand you will need to win. In a shorter-handed game, you may only need two pair to actually take the hand down.

If you are going last, you will already know what you need to roll to win, and rolling until you have the best hand will be your best bet.

Of course, you can always re-roll the dice that don’t fit into your hand and try to get as strong of a hand as possible, but I highly recommend being aware of what everyone else has rolled once it’s your turn to play.

While many players believe they have a magical way of rolling the dice to get the desired results, the truth is there is no good or bad way to roll your dice unless you are cheating.

Do not try to cheat or angle other players, and don’t try to get the desired rolls by rigging the way your roll the dice. Always roll fairly if you want to be invited to future poker dice games.

Differences between Poker Dice and Poker

Dice and card games don’t always mix too well, but in the case of poker dice, the two are a perfect match.

Poker dice derives its name and some of the basic rules from the game of poker, but the truth is that the difference between the two is quite drastic.

Here are the biggest differences between poker and poker dice:

Of course, the most obvious difference between the two is that poker dice is not played with cards while all other versions of poker are, but you already knew that one!

You now know poker dice rules and should be ready to play your first game. All you need is some good dice to play with and possibly a dice cup and tray to play on.

If you can’t find a set of poker dice to buy, you can always play with regular dice as well.

I do recommend getting specialized dice that are color-coded and easier to play with.

As far as the rules of the game go, poker dice is a fluid game, and you can decide on the rules yourself, as long as you agree with your fellow players on what the rules are.

I recommend writing any outstanding rules down before play begins so that everyone in the game is aware of them and there are no disputes in the middle of the game.

One fun rule you could have is introducing betting rounds between different rolls, which could make the game of poker dice more similar to the game of Deuce to Seven Triple Draw.

While playing this way with dice exposed may not be the most fun way of doing it, it does help avoid any cheating or angle shooting by players.

If you prefer to keep things simple, playing by the basic poker dice rules and setting your stakes before the game starts the best and safest way to go about things! 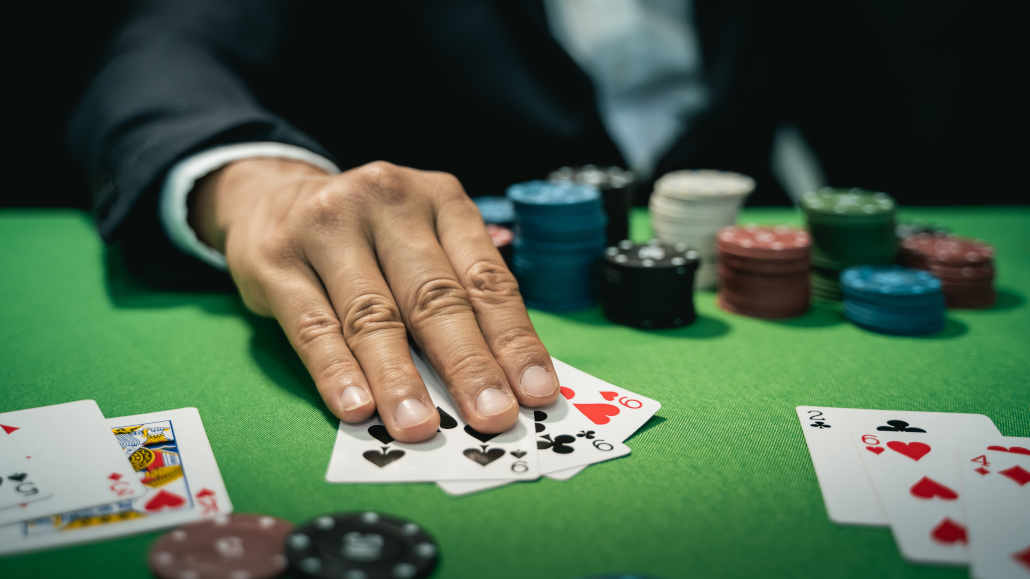 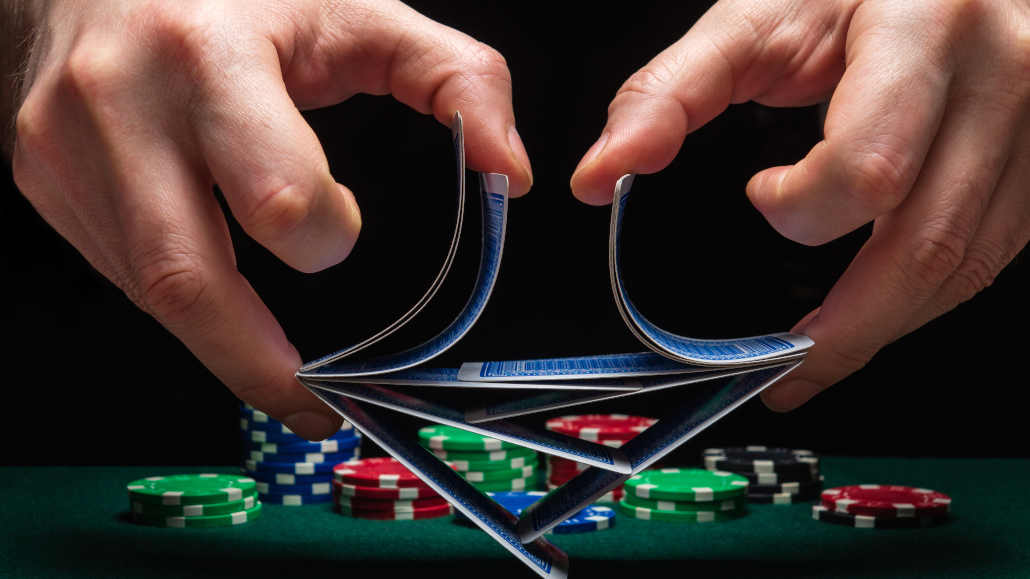 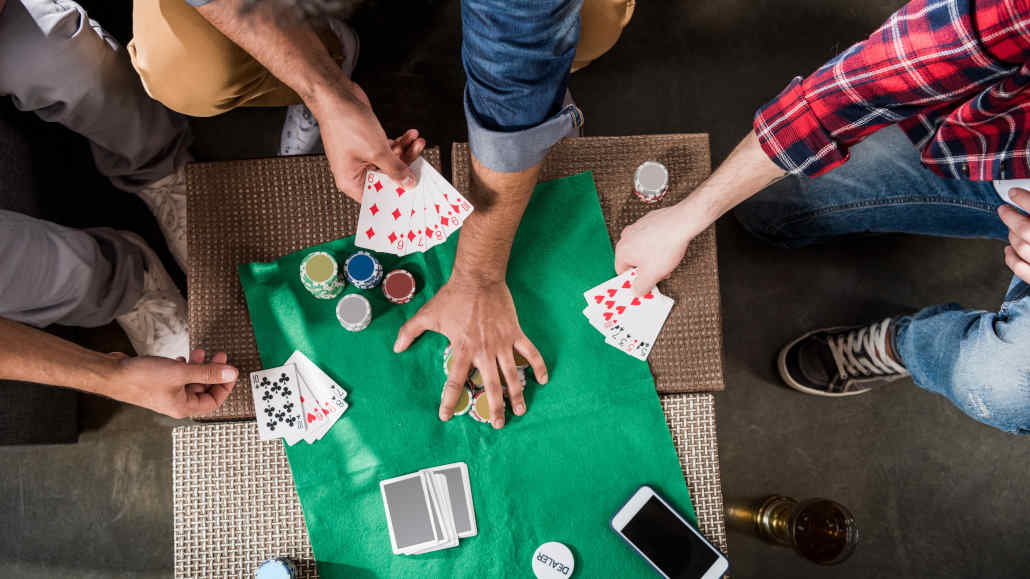 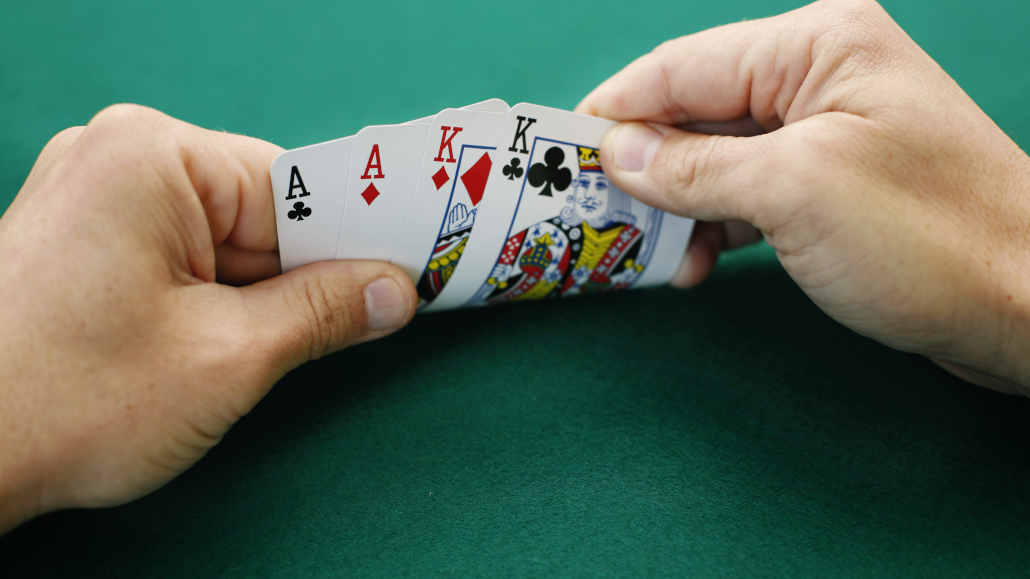