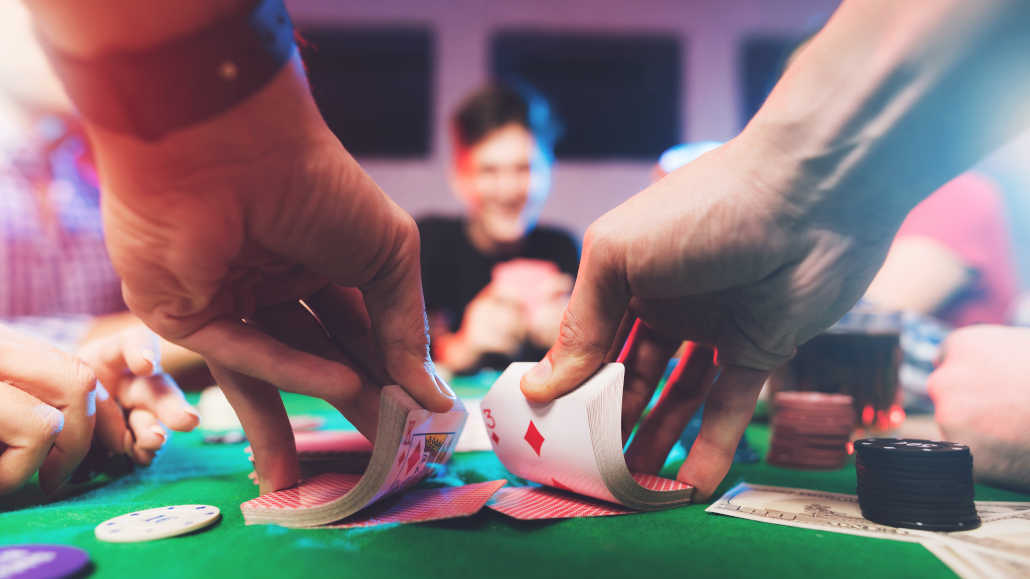 Thanks to its global popularity, many people nowadays associate poker with Texas Hold’em. However, there are many more different types of poker games.

In fact, there are so many poker variations, that even the more seasoned players have trouble wrapping their heads around all the different poker formats and the rules that go with each of them.

If you are a beginner or an experienced poker player that is looking to learn different poker variants, this article will help you understand how the most popular formats of poker are classified and how to play them.

The easiest way to learn about all the poker variants is to first classify them into categories. With this said, there are three main types of poker games, and all other poker games fall into one of these categories.

The three main categories of poker games are:

The main difference between these three categories is the rules by which the poker games in each of these categories are played.

In terms of rules and strategy, draw poker games are on the simpler side. This makes them perfect for people that are looking to get started with poker.

Games in this category are also the oldest poker games and were played long before games like Texas Hold’em.

All of the poker games in this category are based on two major rules:

These games can be identified by the simple fact that each player is dealt a complete hand at the beginning of the round. and tries to improve his combination by replacing some of the cards and drawing new ones.

Some of the most popular draw poker formats include 5-Card Draw Poker and 2-7 Triple Draw Poker. 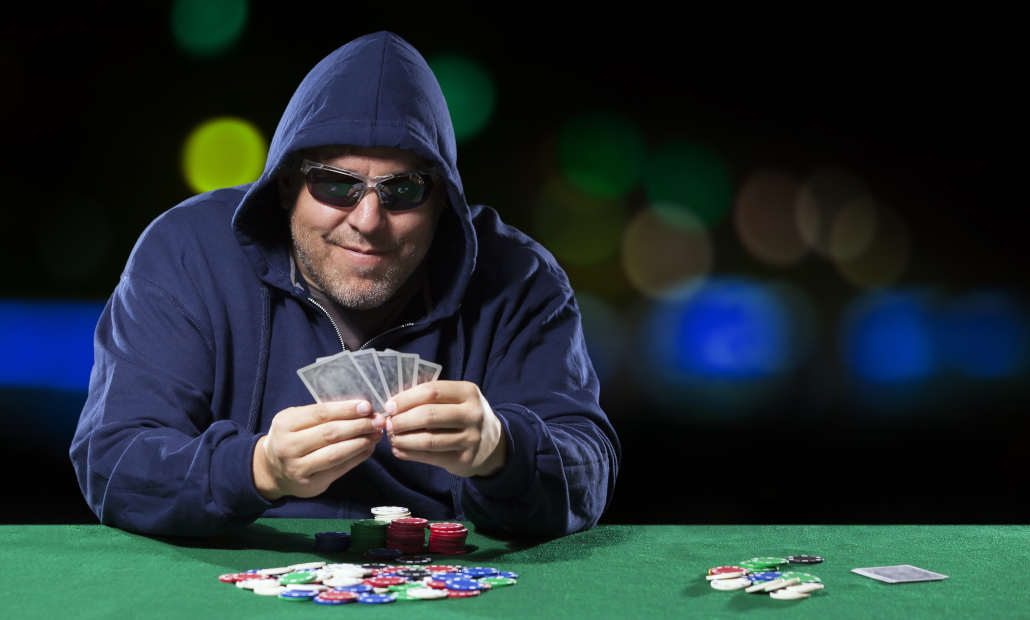 If you watched movies about the Wild West, there is a high chance that some of the scenes featured actors playing 5-card draw. This was the most popular poker variant at the time.

Now that you know a little bit about the history of the 5-card draw let’s get into the rules of the game.

5-Card Draw is played with a standard 52-card deck and two to six players can participate in the game. The goal is to put together the highest-ranking 5-card hand and win as many chips as possible.

Before the dealer starts dealing the cards, each player puts an ante into the pot. The amount of the ante is determined before the game starts.

After the antes have been added to the pot, each player gets dealt 5 cards, one card at a time. The player on the direct left of the dealer is the first to act and the action continues in a clockwise direction.

When the first round of betting ends, each player left in the hand can discard up to 3 cards from his hand.

These discards are replaced by new cards from the deck.

This is followed by another round of betting after which the remaining players show their hands, and the best 5-card combination wins (showdown).

In 5-Card Draw, there are only two rounds of betting. One happens before the players discard their cards, and the second after they get new cards. 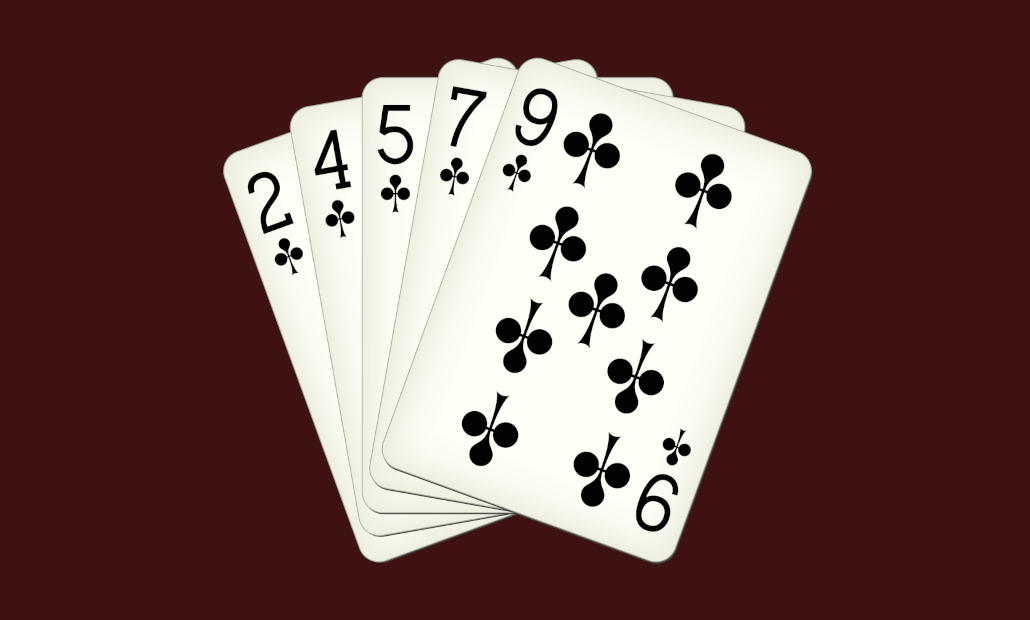 2-7 Triple Draw is one of the newer variants of poker, that has become extremely popular in the last two decades. The game is played with a standard 52-card deck and up to 6 players can participate.

Another difference between 5-Card Draw and 2-7 Triple Draw is that in 2-7, instead of antes, players post blinds.

The game starts with SB and BB posting blinds and dealers dealing 5 cards to each player starting with the player on the direct left of the BB (UTG). After the cards have been dealt, the first round of betting starts, and the UTG player is first to act.

In total there are four betting and three draw rounds in 2-7 Triple Draw. When the last round of betting ends, players still in the hand show their cards and the best low hand wins.

All poker variants that are played with a mix of exposed and hidden cards and multiple betting rounds fall into the category of Stud Poker.

The main attributes of Stud Poker games are:

These games can be identified by the simple fact that each player has both hidden and exposed hole cards.

The most popular versions of Stud Poker are Seven Card Stud and Razz Poker. 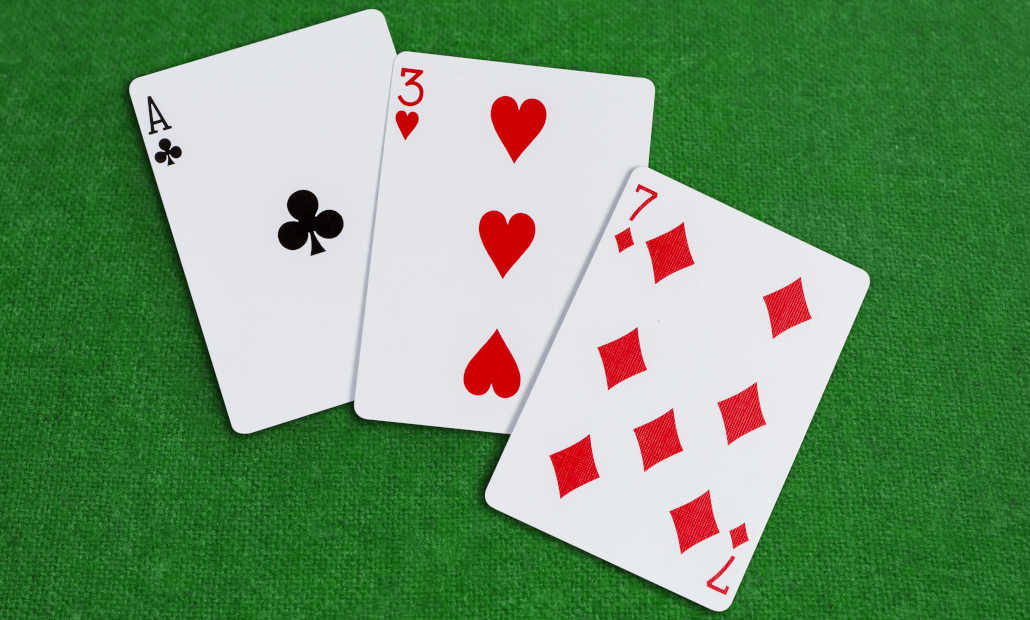 Seven Card Stud is played with a standard 52- card deck and between two and eight players can participate in the game. In Seven Card Stud the goal of the game is to win chips by having the best 5-card poker hand or making all other players in the hand fold.

Just like in 5-Card Draw, before the hand begins, each player will place an ante into the pot. The amount of the ante is determined before the game.

After the antes have been posted, the dealer deals each player 3 cards, one card at a time. The first two cards are turned face-down. The third card is face-up.

The player with the lowest face-up card is called the Bring-in and he is required to make the first bet. The action then continues in a clockwise direction until all players get a chance to act.

After the last player acts, the dealer deals one more card face-up to all players who are still in the hand. The first player to act after the second face-up card has been dealt is the player whose face-up cards make the best poker hand.

This process continues until all players in the hand get 4 face-up cards in a row. Then, the last card is dealt to all players face down.

In total each player remaining in the hand after all cards have been dealt has 3 cards turned face down and 4 cards face up.

When the last betting round ends, all players remaining in the hand show their cards. The player who can make the best 5-card combination from the seven cards they hold wins.

Seven Card Stud has a betting structure that consists of low bets and high bets with the high bets being double the amount of low bets.

In the first two betting rounds, the bets are made with low bets, while high bets come into play in the final three rounds. 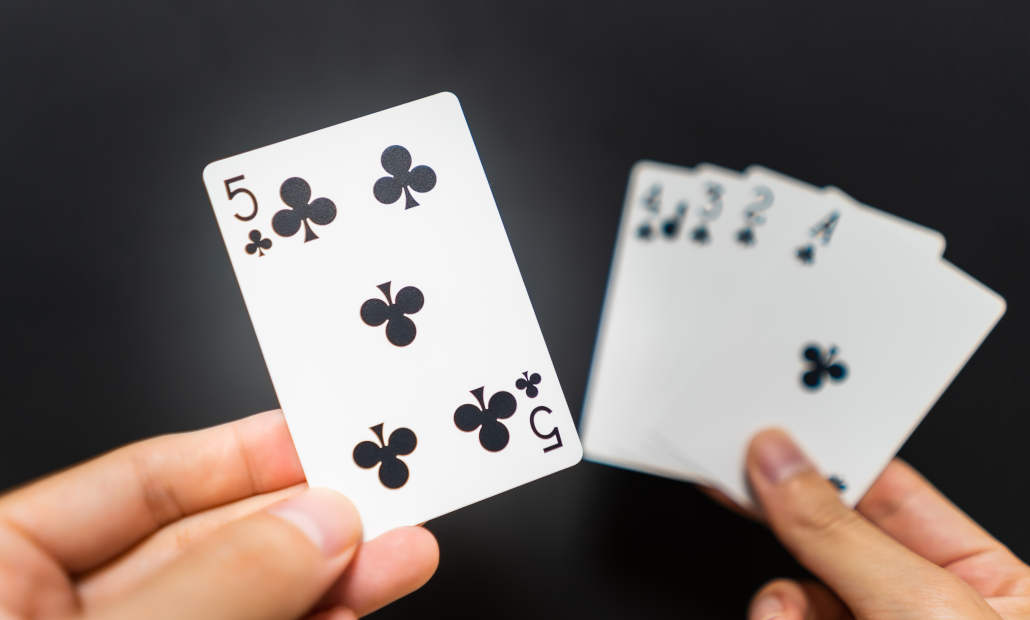 The Ace always plays low and straights and flushes do not count against the player for low.

In Razz, before the cards are dealt, each player pays a predetermined amount of ante into the pot. Then the dealer deals each player three cards, two cards face down, and one card face up, one card at a time. The face-up card is called the Door Card.

Then a betting round, called the third street (because every player has three cards) begins with the player who holds the worst (the highest) Door Card. (in Razz the worst possible card is the King)

This player can either choose to pay a bring-in (which is the same amount as the ante) or to complete, putting in the small bet. The small bet is usually 5x the ante.

After this round of betting is completed, each player receives another card turned face-up. A new betting round starts with the player whose two face-up cards make the best lowball hand.

This is followed by the last round of betting after which all players left in the hand show the best 5-card low-ball hand that they can make from the seven cards they hold. This is the showdown, and the winner is the player with the best low hand.

Just like Seven Card Stud, Razz is also a game of fixed limits, it has an ante, a small bet (usually 5x the ante), and a big bet (2x the small bet).

Poker games that have community cards that players can use in combination with their hole cards to create the winning hand are called Community Poker Games.

You can recognize these games by the fact that after the first round of betting and before each next round of betting, the dealer puts one or more cards in the middle of the table, turned face-up – community cards.

By far the two most popular community poker games are Texas Hold’em and Omaha Hold’em. 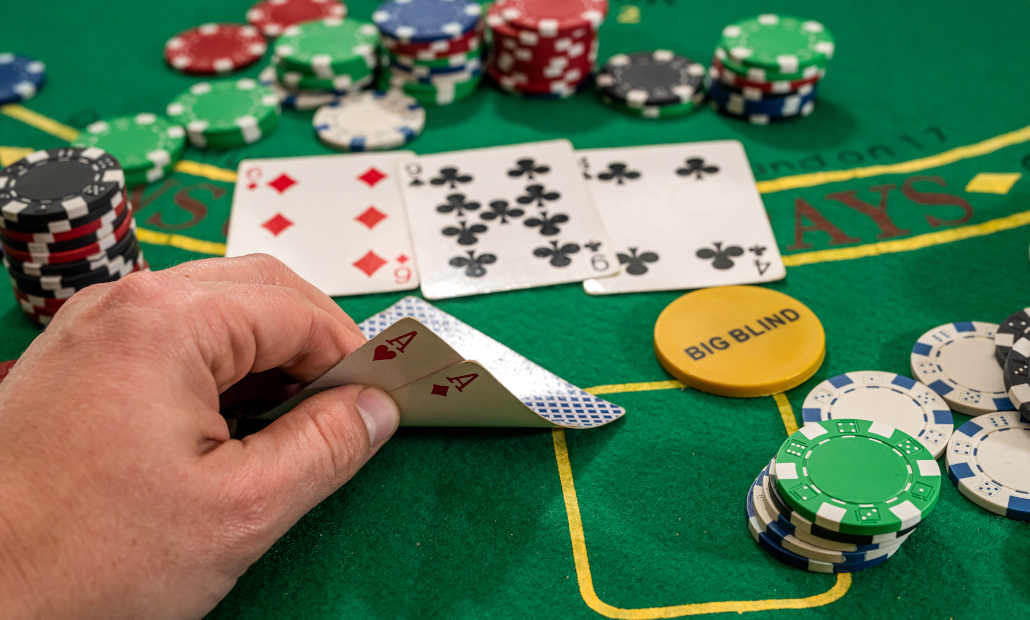 Texas Hold’em, more specifically No Limit Texas Hold’em, is by far the most popular variant of poker. It is played by millions of people worldwide.

The goal of the game is to collect the best possible 5-card hand using the two hole cards and five community cards. The best hand in Texas Hold’em is the Royal Flush, a combination of A, K, Q, J, and T of the same suit.

In Texas Hold’em, the SB and the BB are required to post blinds before each hand. The game starts with the dealer dealing each player two cards face down, one card at a time.

The first card goes to the player on the direct left of the BB (UTG) and continues in the clockwise direction.

Before the flop, the first player to act is the UTG. After the pre-flop round of betting ends, the dealer puts three cards face-up on in the middle of the table. These three cards are the first community cards and are called the flop.

This is followed by a round of betting which starts with the player on the small blind (or the first still active player to their left). When this round of betting is finished, the dealer puts the fourth community card, called the turn, in the middle of the table.

Another round of betting ensues, after which the dealer puts the fifth and the last community card in the middle of the table (the river).

After the river has been dealt, the player gets another chance to bet. When that is done, the players in the hand show the best 5-card combination they can make using their hole cards and the community cards.

In Texas Hold’em, players can use any five of the seven available cards and are not required to use a specific number of their hole cards in the process. 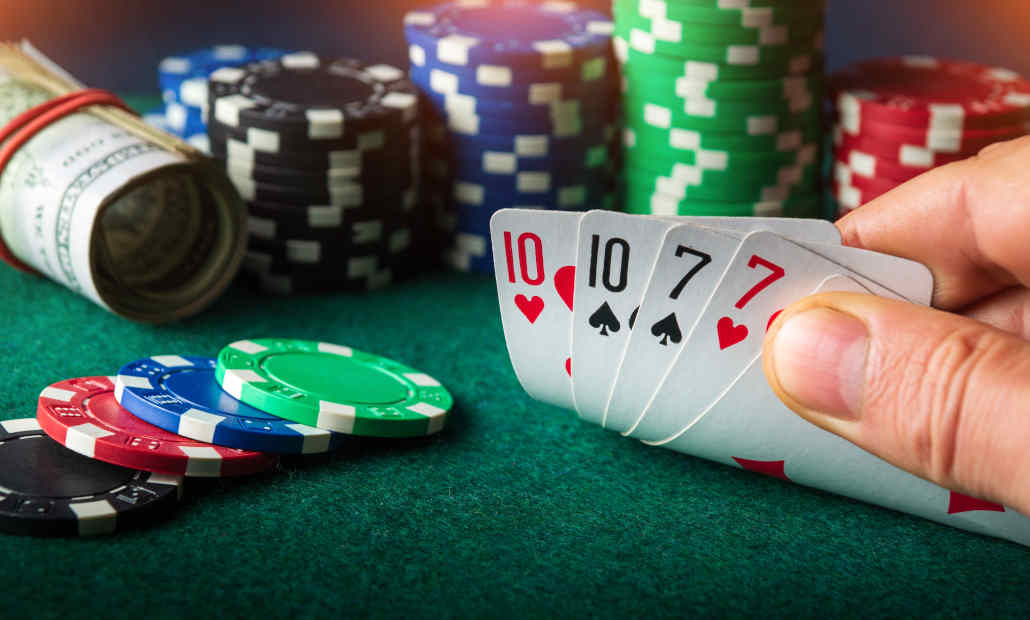 The second most popular community poker game is Omaha Hold’em, more specifically Pot Limit Omaha. Following in the footsteps of No Limit Hold’em, this variant of poker is becoming more and more popular with each year that passes.

The goal of Omaha Poker is to collect the best possible 5-card hand using their 4 hole cards and 5 community cards. Hand rankings in Omaha are identical to those in Texas Hold’em which means that the best possible hand is the Royal Flush.

When combining the best possible 5-card hand in Omaha, players are required to use exactly two of their four hole cards.

Omaha starts with the SB and the BB posting the small and the big blind after which the dealer deals each player four cards, one card at a time.

The action opens with the player on the direct left of the BB (UTG) and continues with the betting and community card dealing rounds in the exact same order as in Texas Hold’em.

Apart from the number of hole cards that each player gets and must use to complete their 5-card combination, the main difference between No Limit Texas Hold’em and Pot Limit Omaha is in the amounts that players can bet.

In No Limit Hold’em players are not limited and can bet as much as they want when it is their turn to act. In Pot Limit Omaha, the maximum the players can bet is the size of the pot, hence the prefix “pot limit.” 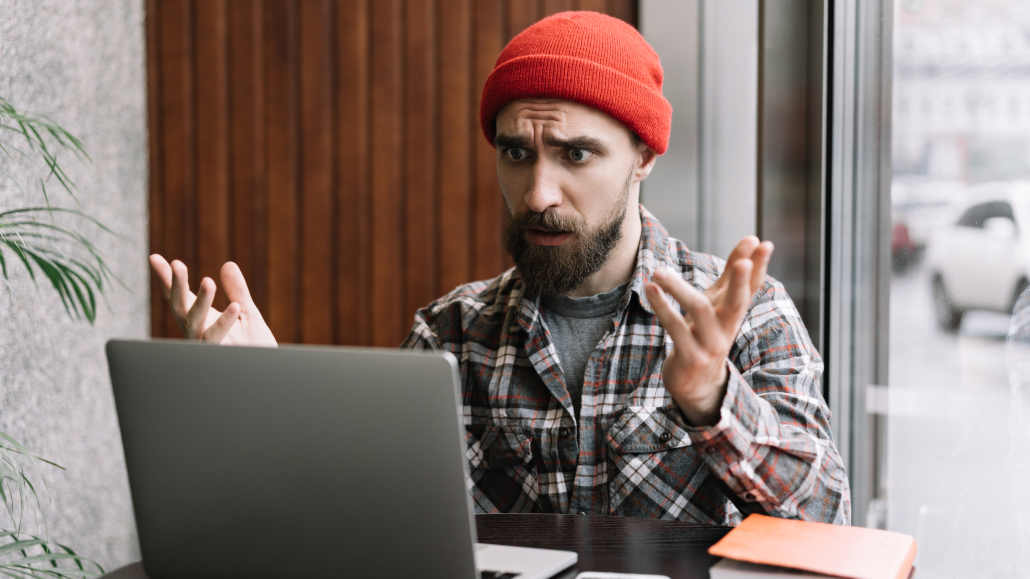 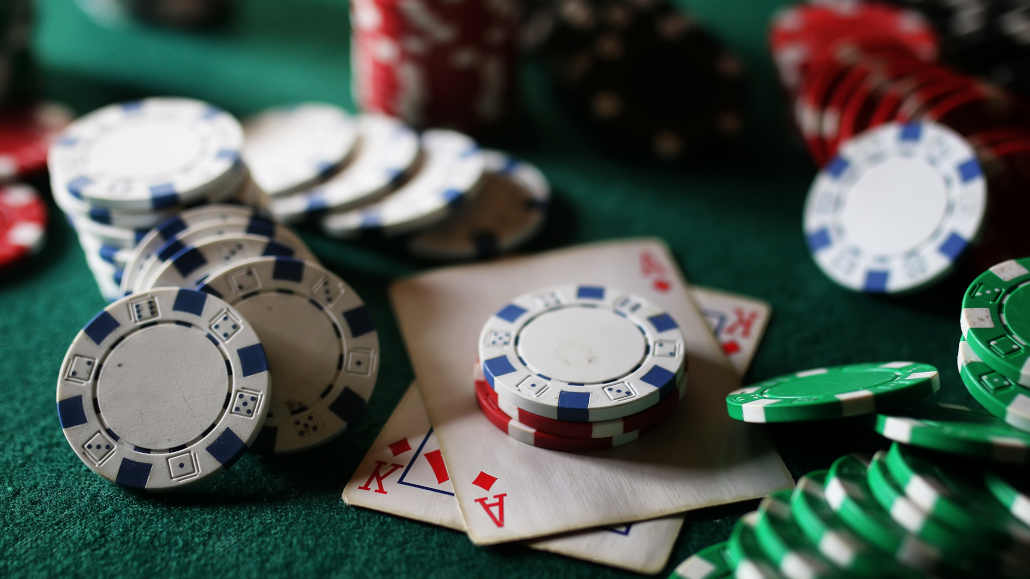 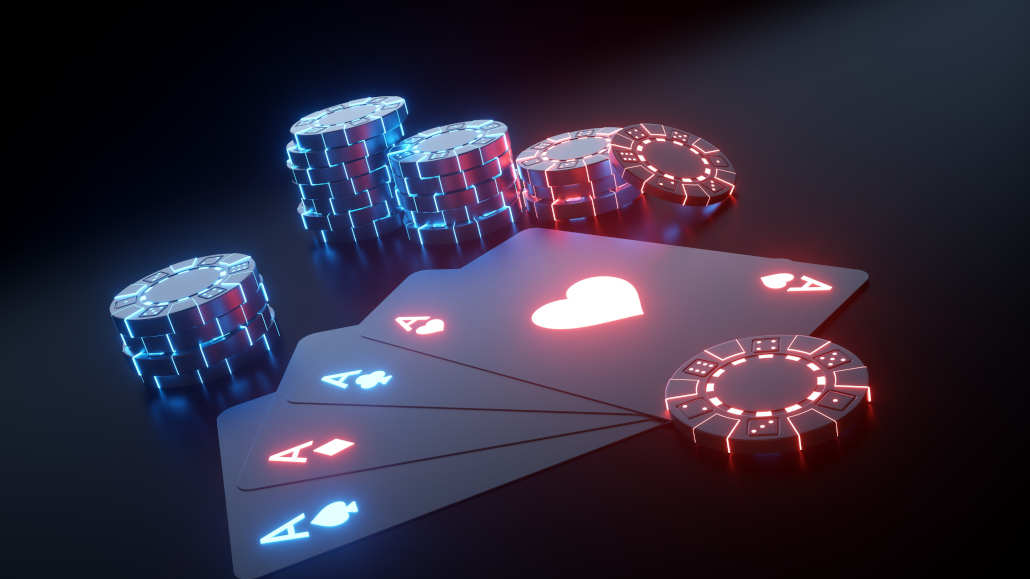