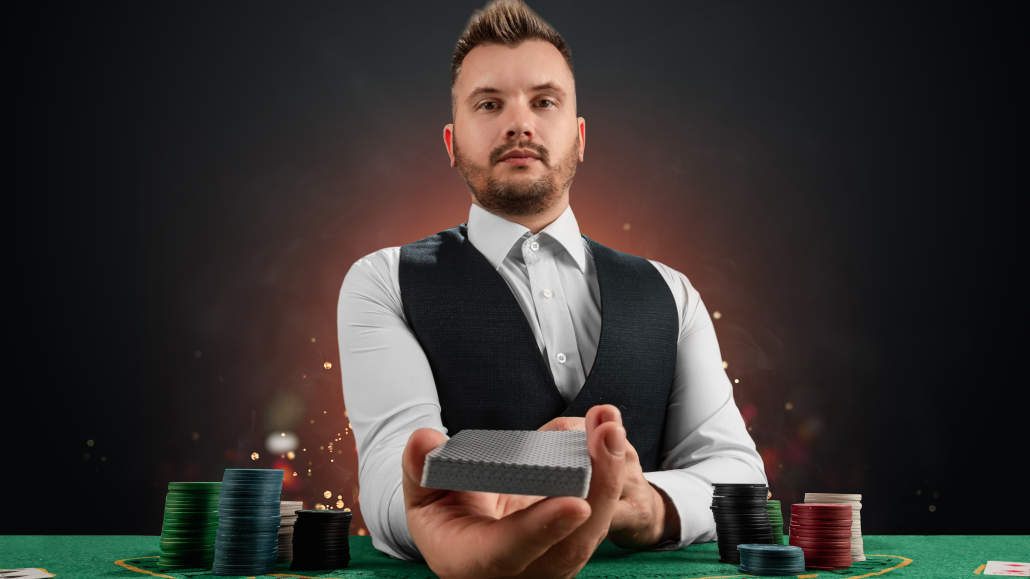 If most of your volume comes from online poker sites or from your local casino, you probably take the dealer role for granted.

However, if you are a regular in home games or even play them only occasionally you will understand much better how demanding dealing in Texas Hold’em is.

With this said, if you want to know more about how to deal poker, this article is for you as we will break down Texas Hold’em dealing.

Learn the Rules of Texas Hold’em

If you play Texas Hold’em regularly, you probably know the rules, but we still couldn’t leave this advice from the article as understanding the game is one of the bases of Texas Hold’em dealing.

The dealer’s duties start with a brand new deck of cards, and the first thing you want to do is to make sure that the deck doesn’t have any flaws and contains all 52 cards.

Without the correct number of cards, the game comes into question.

The best and the most efficient way to do this is to spread the deck across the table so that both you and the players can see that all 52 cards are in there. You should repeat this process whenever you take a new deck of cards into the game.

Another important step to learn and apply is card shuffling. You should shuffle the cards at least once after each hand either manually or with an automatic shuffler. If a new deck of cards is introduced, it should be shuffled three times before the start of the hand.

Making Sure Everything Is Ready for the Start of the Hand

Before you start dealing the cards, you need to make sure that the dealer button (which marks the player that acts last on each round of betting post-flop) is where it should be. The dealer button should be moved one spot to left after each hand. 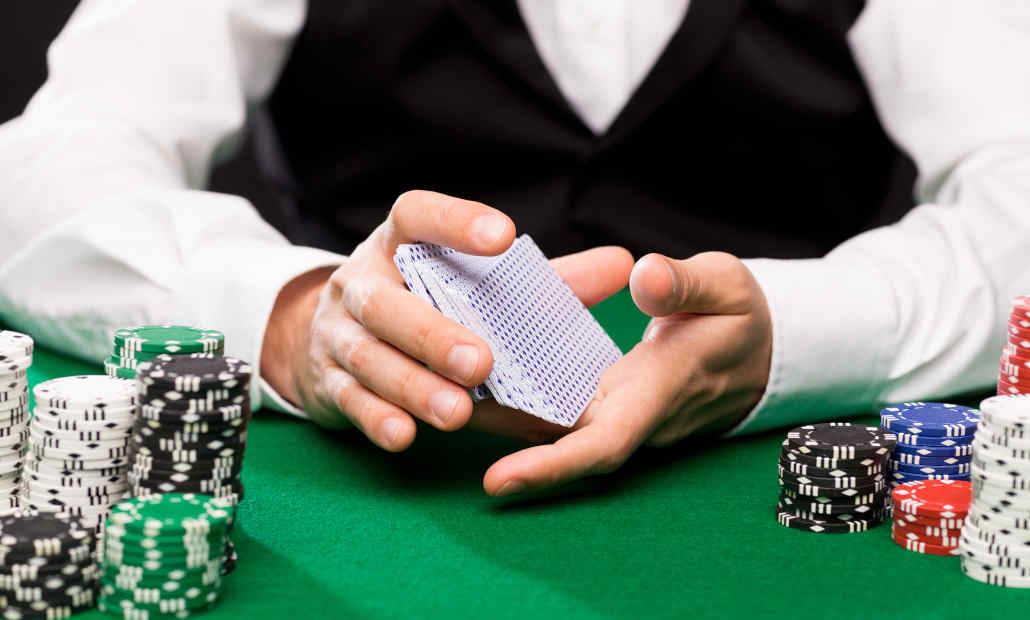 If the game is played with straddles or antes, those chip amounts should also be posted before the hand starts.

After you make sure that the deck contains all 52 cards, the dealer button is in the right place, and that the correct blind amounts have been posted, you can proceed to deal the cards.

Dealing in Texas Hold’em begins from the player on the direct left of the button (small blind) and continues clockwise, with each player receiving one card at a time.

The dealing ends after each player get two cards (these two cards are also known as hole cards).

Now, the first betting round can begin. The player on the direct left of the big blind (also known as under the gun) acts first and he has three options.

If he chooses the third option, his cards go into the muck pile which should be located under the hand in which the dealer is holding the deck. 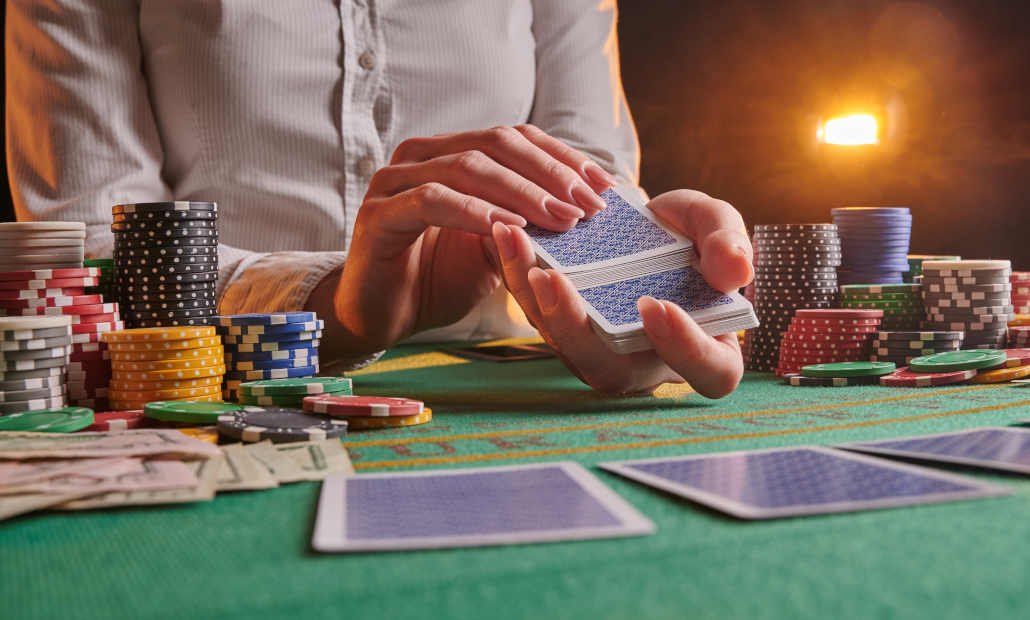 The preflop betting round continues clockwise until all players get the chance to act. The last player to act preflop is the player in the big blind. If all players decide to throw away their hands preflop, the big blind wins the hand.

When at least two players have matched the amount of the biggest bet, the next round of betting, known as the flop, can begin.

How to Deal the Flop in Texas Hold’em

Make sure that the cards are in the middle of the table, as this is the standard.

After you deal the flop, the second round of betting begins, and the first player to act post-flop is the player in the small blind.

After him, other players that are still holding cards act in the clockwise direction, with the player on the button being the last to act.

If this round of betting decides the winner of the hand, the dealer takes all of the chips that were placed as bets during the hand and places them in front of the player who won. 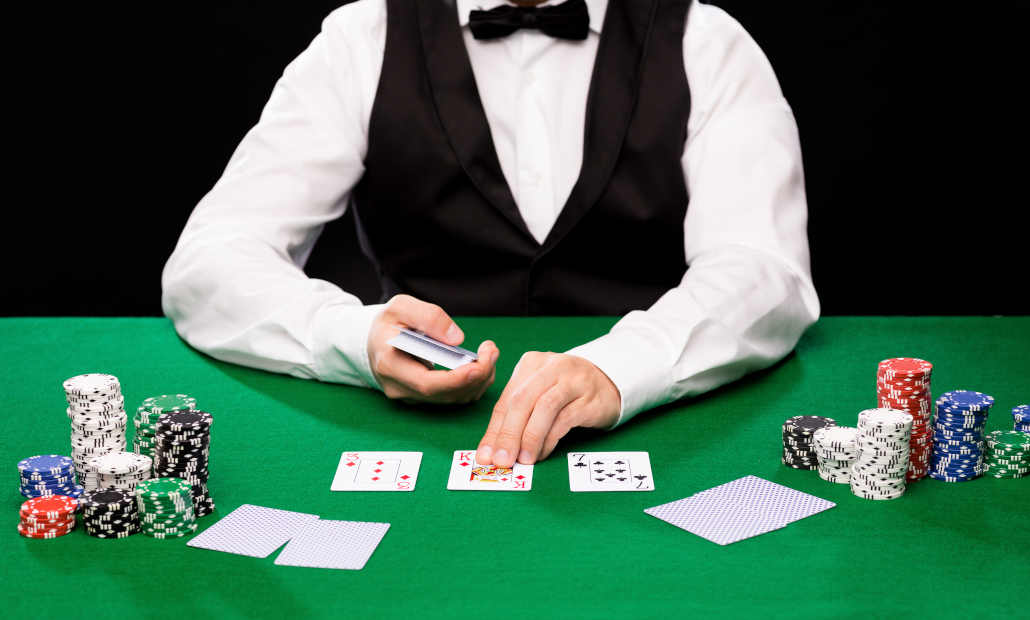 If not, all of the chips that were placed as bets are put on one pile on the opposite side of the pile with the mucked cards (discarded cards).

The hand continues and goes to the next betting round (called the turn) if there are two or more players left in the hand.

How to Deal Poker: Dealing the Turn in Texas Hold’em

This betting round also starts with the dealer discarding the first card in the deck. After you put the top card from the deck out of play, you then take the next card and place it face up to the right of the three cards that are already on the flop.

After you put the fourth card face up on the table, the turn betting round begins. Once again, the first player to act in this hand is the small blind and then the betting round continues with the other players in the clockwise direction.

Here, the procedure with the chips is the same as on the previous street meaning that if there are still players left in the hand after the fourth betting round ends, all of the chips are placed on the same pile (the pot).

How to Deal the River in Texas Hold’em

If the winner of the hand isn’t decided after the turn betting round, the fourth and the final betting round known as the river begins.

When it comes to the card distribution on the river, the process is the same as on the turn. The dealer discards the top card from the deck and places the next card face up to the right of the four cards which are already on the table.

The final placement of the community cards on the table should look like this:

How to Deal Poker: The Showdown

The fourth betting round can end in two ways:

It is customary that the player who made the last bet or raise is the first player to show his cards. The showdown continues in the clockwise direction.

All players after the player who shows his cards first have the option to muck their cards without showing them and forfeit their hand.

After the showdown, the dealer’s job is to announce the winning hand and combine the winner’s hole cards with the community cards so that the winning combination can be visualized. 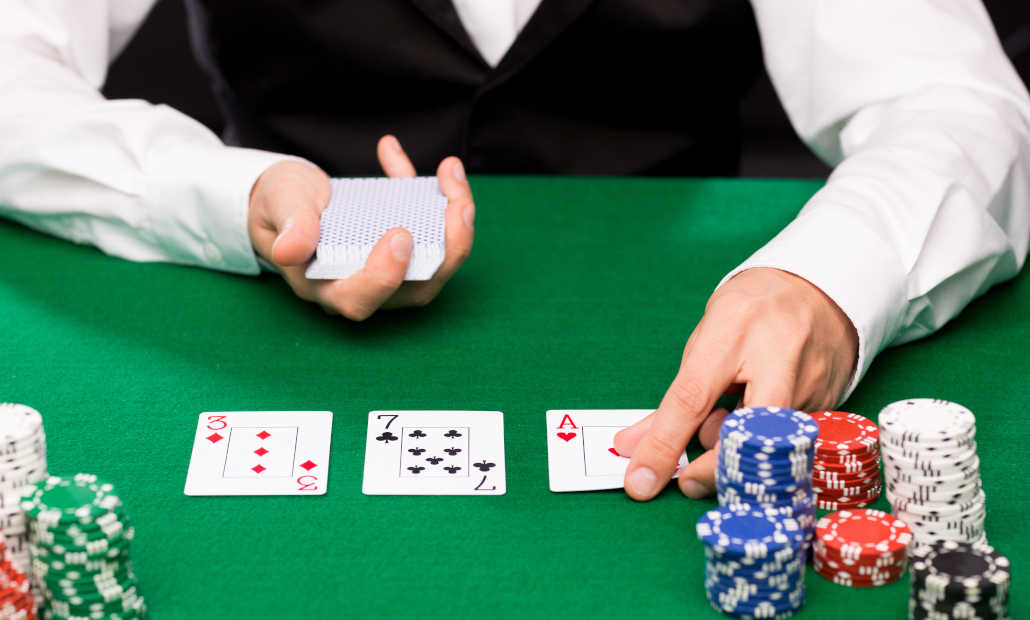 It is important that you as the dealer don’t rush this step so it is absolutely clear who and why won the hand.

Then the dealer pushes all of the chips that were put in the middle during the four betting rounds towards the winner.

After the hand ends, the dealer’s job is to put all of the cards from the table back in the deck and shuffle the deck.

Also, the dealer button is moved one spot in the clockwise direction. The small blind and the big blind place their blinds, and the next hand can begin.

How to Deal Poker FAQ

Now that we explained a typical poker hand in Texas Hold’em from the dealer’s perspective, it is time to take a look and answer some questions about different situations that you can face while dealing in Texas Hold’em.

What is the dealer button used for?

The dealer button is used in games where there isn’t a specific dealer to mark the player whose turn is to deal the cards.

In casinos, the dealer button is used to mark the player who will act last on each street post-flop.

How do we determine who gets the dealer button on the first hand?

To determine who will get the dealer button in the first hand, the dealer shuffles and cut the deck and then each player gets one card. The player who gets the card of the highest rank gets the button.

If one or more players have cards of the same rank, then the suits are used to determine the winner. The highest ranked suit is spades followed by hearts, diamonds, and finally clubs.

What should the dealer do when the hand reaches the showdown and both players have the same combination?

In this situation, the dealer should announce that both hands have the same strength and split the chips into two equal amounts, giving each player half of the pot. This situation is also known as a “chopped pot.”

What should the dealer do in Texas Hold’em if one of the hole cards is accidentally exposed?

The protocol for these situations depends on the number of exposed cards. If one hole card becomes exposed during the deal, the dealer will take that card and place it face up on the top of the deck as the first burn card.

Then he will deal another card to the player whose card was exposed.

If two or more cards become accidentally exposed during play, the hand will be pronounced a misdeal and forfeited.

All chips will go to their original owners after which the dealer will shuffle the deck to prepare for a new hand.